* Government announces funding * Car companies can bid to take part * 100 cars will be trialled in towns and cities... 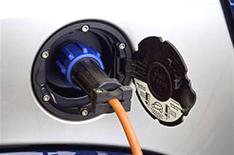 The Government has announced a 10 million project to promote the development and use of electric cars.

Under the plan, which will be overseen by the Technology Strategy Board, manufacturers will bid to participate in a project to run electric car and ultra-low carbon vehicle demonstration projects.

In addition, around 100 electric cars will be provided to various towns and cities to allow motorists to give feedback on the practical steps needed to make greener motoring an everyday reality.

A further 20 million had been set aside for UK research into improving technology that could make electric and other green cars more practical and affordable.