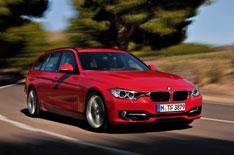 This new BMW 3 Series Touring will beat its Audi A4 Avant and Mercedes-Benz C-Class Estate rivals on both load capacity and fuel efficiency when it arrives in showrooms in June. So, at a stroke, it wipes out one of the biggest arguments that was always levelled against its predecessor.

As with the latest 3 Series saloon, the new generation of BMW's smallest estate is longer and much of this increase in size has been transferred to the loadbay. The new car is 97mm longer than the model it replaces, and its wheelbase increases by 50mm. The boot space is up by 35 litres, to 495 litres with the seats raised; that's more than both the Audi A4 Avant (490 litres) and Mercedes C-Class Estate (485 litres).

With the rear seats lowered the BMW matches the Merc's 1500 litres and is still ahead of the Audi's 1430 litres.

The four-cylinder engines get a six-speed gearbox as standard, although both can be ordered with an optional eight-speed automatic. That transmission is the only one available with the 330d.

Other diesel engine options will become available next spring; these will include the 316d (114bhp/192lb ft) and 318d (141bhp/236lb ft). There will also be a 320i petrol variant. Around the same time, four-wheel drive will be offered; badged xDrive, the system should appear on the 320d and 330d.

2012 BMW 3 Series Touring: in the cabin
The Touring's front cabin gets the same treatment as the latest 3 Series saloon, including the unusual 'ribbed wood' dashboard trim on Modern-badged variants. There's also a flexible centre storage unit, which can be either an oddments tray or a pair of cupholders.

The rear cabin has around 17mm more kneeroom, according to BMW, and better access through the door aperture.

Standard equipment includes stop-start across all engines and transmissions, an electric tailgate that opens and closes via a key fob button, air-conditioning, a 6.1-inch colour screen with USB audio interface, keyless start, cruise control and, on all but the most basic trim levels, rain sensors with automatic headlight activation.

The safety kit includes front and side airbags, head airbags front and rear, active headrests and a tyre defect monitor.