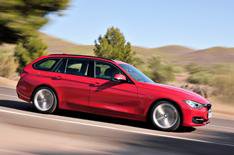 The new BMW 3 Series Touring is the most practical estate version of the 3 Series yet. It's longer than its predecessor, has more loadspace, and comes with a range of features to boost practicality.

Considering its based on the brilliant 3 Series saloon, it promises to be a formidable rival to the Audi A4 Avant and Mercedes C-Class Estate.

Whats the 2012 BMW 3 Series Touring like to drive?
Although its rear springs and dampers are slightly stronger to cope with larger loads, the Touring drives much like the 3 Series saloon.

Stick with the standard chassis set-up and you get a slightly unsettled low-speed ride, a little too much body roll in corners and the bonnet rises and falls noticeably under firm acceleration and strong braking.

Upgrade to Adaptive M Sport Suspension for 750, however, and the Touring is transformed. The steering becomes more responsive and body lean is better controlled, creating a more stable feel at high speeds and allowing the car to flow through corners.

Three models will be available from launch, including the 320d, which will undoubtedly be the biggest seller. This uses a 181bhp 2.0-litre four-cylinder diesel engine that offers a fine blend of performance and flexibility, so its able to take advantage of overtaking opportunities and feels effortlessly fast on the motorway. The only disappointment is that its a little noisy when the engine is cold or being revved.

Youll have no such complaints in the 330d. Its 255bhp 3.0-litre six-cylinder diesel unit is smooth and quiet at all times. Whats more, it feels extremely responsive throughout the range, with low-speed acceleration a particular forte when the car is in Sport mode.

The eight-speed automatic gearbox standard on the 330d and an option across the rest of the range also impresses, because its exceptionally smooth when you're trundling through town and snappily quick when you want to press on.

Completing the Touring line-up is the 328i. This is powered by a 242bhp 2.0-litre turbocharged four-cylinder engine, but its a little short on torque compared with the 2.0-litre diesel, let alone the 3.0-litre. This, and the fact that it doesnt rev as willingly as an Audi TFSI engine, or satisfy keen drivers like BMWs wonderful six-cylinder petrol engines, means it always feels a bit underwhelming.

Whats the 2012 BMW 3 Series Touring like inside?
The new 3 Series Touring is 97mm longer than the model it replaces, its wheelbase is 50mm longer, and theres a less dramatic swoop to the roofline. All of this equates to useful extra head- and legroom in the cabin.

Additionally, the rear seatback has a 40-20-40 split, to increase loading options, while the tailgate is powered, and you can pop open the rear screen alone, to get small items into or out of the boot quickly.

There's also a 'Smart Opener' system, as part of the Comfort Access option pack, which means you can open the boot simply by waggling your foot under the rear bumper. Its as useful as it is impressive, but dont take our word for it; just ask any parent returning from the shops weighed down with armfuls of carrier bags and with a couple of toddlers in tow.

Cabin is as classy as the 3 Series saloon's

Up front, the 3 Series Touring is identical to the saloon, so theres plenty of space, first-rate materials and a design that's easy on the eye. The latest version of BMWs iDrive system gives you quick and easy access to the various infotainment menus.

Should I buy one?
Traditionally, competition for the 3 Series Touring has come almost exclusively from other premium-badge estates, but this time around there are internal candidates vying for your cash.

The X1 crossover is roughly the same size, cheaper and will do almost as good a job, while 2013 will see the waters muddied even further with the arrival of the 3 Series Gran Turismo, which is effectively a 3 Series hatchback.

Depending on the model, the Touring carries a premium of between 1300 and 1420 over the equivalent 3 Series saloon. Thats decent value when you consider the extra kit and space you get.

We'd recommend choosing the engine and options carefully, though. As good as the 330d is, its not superior enough to the 320d to justify its higher price and running costs. The optional adaptive dampers and automatic gearbox, on the other hand, are worth having.

They'll bump the price up to more than 30,000, but the efficient engine helps to keep other bills low and, as far as small executives estates go, the 3 Series Touring is as good as it gets.

By Tom Webster and Pete Tullin