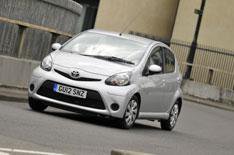 The Toyota Aygo has been given a mid-life refresh for 2012, in the same vein as its sister cars, the Citroen C1 and Peugeot 107.

There are subtle cosmetic changes, a cleaner, more economical engine, and two new variants: the Fire, designed for those who want something sporty, and the Ice, that we tested, which offers more comfort and on-board connectivity.

Under the bonnet, the 1.0-litre, three-cylinder engine is now cleaner and more efficient. With CO2 emissions of just 99g/km, the 2012 Aygo is exempt from road tax and London's Congestion Charge. Fuel economy is up by 3mpg, to an average of 65.7mpg.

What's the 2012 Toyota Aygo like to drive?
Extremely similar to the model it replaces, which is hardly surprising given that it's virtually identical. This means that the Aygo is best suited to towns and cities; the steering is light and has an excellent turning circle, although it's a bit vague. Stop-start city traffic is bearable, too, because the clutch operation is effortless and gearchanges are smooth.

Take to faster roads, though, and the Aygo needs to be worked hard to keep up with traffic. The car's small engine and long gearing blunt its progress, so overtaking requires plenty of advance planning.

The engine also lets you know just how hard it's working, although it quietens down at motorway speeds only to be replaced by intrusive road- and wind noise. The ride is a little firm, too.

What's the 2012 Toyota Aygo like inside?
This remains largely unchanged, apart from a restyled steering wheel, gearstick and updated radio. The Ice version we tested includes air-conditioning, Bluetooth phone connectivity and a USB-port as standard.

Also standard on the Ice version are leather-and-Alcantara seats. However, like the standard seats, they lack support and aren't height-adjustable.

There's room for four adults, and the boot is a useable size.

Should I buy one?
The Aygo is a desirable city car, and it's clear to see why the previous-generation model sold so well. However, the subtle revisions for 2012 fail to disguise the car's age, and it no longer dominates the market for budget superminis.

Newer rivals such as the Seat Mii, Skoda Citigo or VW Up are far better cars with more attractive entry-level prices.

Best cars for less than £150 per month