More for you |
Every 5-star car on What Car?Used test: Maserati Levante vs Porsche MacanNew issue of What Car? magazine on sale nowMost and least reliable small SUVsRevealed: the car makers whose discounts have got bigger since lockdown
Home
News
2nd Seat Bocanegra
news 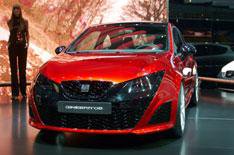 The name comes from a 1970s Seat, but this concept car is decidedly 2008. Thats because it shows how the next-generation Ibiza will look when it goes on sale later this year.

The Bocanegra is the work of Seat's new design chief and former Lamborghini designer Luc Donckerwolke. Its styling also previews the design direction of other future Seat models, including an Ibiza-based saloon that will be launched in 2009.

The concept car is powered by a 1.4-litre TSI twin-turbocharged petrol engine linked to a seven-speed semi-automatic gearbox, as used in the VW Golf. To make changing gear using the semi-automatic selector easier, the steering wheel has two straightened sections, although this may not make the production version of the car.

Features include a semi-transparent front end that won't make production, a vast panoramic sunroof that may be available as an option, 19-inch alloy wheels and high-level side indicator repeaters and sporty rear styling that should feature on the finished product.

The interior architecture is that of the new Ibiza, without some of the more intricate detailing of the concept. However, Seat is aware of the criticisms surrounding interior quality of its current Ibiza and promises a much plusher cabin in the new car.

The new Ibiza is expected to go on sale in July as a five-door model only, with three-door models including FR and Cupra variants following in January 2009.

Prices for the five-door car are expected to start at about 9500.

Why it's a highlight:Looks good - and production ready; one of best colour schemes at show.