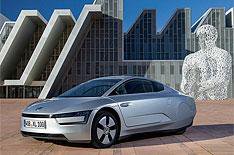 The ultra-efficient Volkswagen XL1 has been confirmed for production, and will make its debut at the upcoming Geneva motor show.

The XL1 uses a plug-in diesel hybrid system that means it can do as much as 314mpg and travel 31 miles on electric power alone. The official CO2 figure is just 21g/km.

These figures come thanks to a 47bhp 0.8-litre, two-cylinder diesel engine, which is combined with a 27bhp electric motor that is powered by a lithium-ion battery. The power is sent to the wheels via a seven-speed DSG gearbox, and VW even says that the XL1 is capable of a 0-62mph time of 12.7 seconds and a top speed of 98mph.

The XL1 can be charged from a standard household mains socket, but also uses energy-regeneration technology to boost the battery, with the electric motor working as a generator when the car brakes. The battery is used to boost the diesel engine, but can also power the car on its own.

The XL1 is also the most aerodynamic car ever made, with a Cd figure of 0.189. It is also incredibly light, at just 795kg.

The aerodynamics are helped by the XL1's sleek styling, and the rear wheels are completely covered by the bodywork to reduce drag. There are no door mirrors. Instead, the XL1 has a pair of rear-facing cameras on the side of the car that send images to the cabin.

The wing doors swivel upwards and forwards, and the seats are slightly offset to make the most of the interior space. The coupe-like roofline does not have a rear windscreen, but there is still some boot space, although it is just 120 litres.

Although it is not expected to sell in huge numbers, the XL1 will be used to showcase future Volkswagen technology. There will be a plug-in hybrid Golf hatchback, and the XL1 also shows how carbon technology can be used in production cars. The plug-in diesel hybrid engine and DSG combination will eventually make it into the VW Up city car.

A carbon monocoque forms the basis of the XL1, while there are also add-on parts made of carbon fibre. More weight is saved through the use of aluminium on the suspension and dampers, ceramic brakes and magnesium wheels.

Prices are not yet confirmed, but Holger Boch, XL1 project leader said: 'It's clearly going to cost a lot more than a Golf - it's made of carbonfibre and has two engines.'

It could cost as much as 70,000, but final prices will be confirmed at the Geneva show. It will be made in left-hand drive only, but should be available in the UK.

Boch said it is a car that will appeal to early adopters, saying: 'The people who buy it will be people who like technology and who like being seen in a low-CO2 car.'

By Tom Webster and Chas Hallett