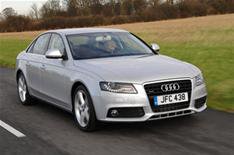 Front impact
There was negligible distortion of the passenger compartment in the frontal test.

Adapative airbags and seatbelts were praised for tailoring the timing and the degree of restraint to suit the size of the occupant and the severity of the impact.

The A4 scored maximum points in the side impact and pole tests.

Child protection
The A4 scored maximum points for its protection of 18-month and three-year-old children.

However, there was no label clearly warning of the dangers of using a rearward-facing child restraint in the front passenger seat.

The presence of ISOFIX markings was clearly indicated in the rear outboard seats, though.

Pedestrian protection
The bumper scored maximum points for its protection of pedestrians' legs, but the front edge of the bonnet scored none.

The bonnet was rated as predominantly poor for the protection it offered to the head of an adult.

Should I buy an SUV or an estate?