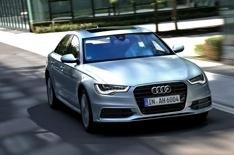 What is it?The A6 Hybrid uses a 2.0-litre TFSI petrol engine mated to an electric motor. Its the same drivetrain used in the Q5 hybrid (a model not sold in the UK).

The result, says Audi, is a car that combines the performance of a V6 with the economy of a four-cylinder model.

According to the company, it can drive almost two miles on electric power alone and hit 60mph in 7.3 seconds, as well as averaging 44.1mpg and emitting 146g/km of CO2.

What's it like to drive? From behind the wheel, the first thing you notice is that the dials are very different from those on a regular Audi A6 saloon. In place of the rev counter, for instance, is a green-edged dial that keeps you up to date with what the hybrid system is up to: whether the battery is being charged and so on.

In most respects, though, the hybrid feels much like the standard A6. It certainly performs well enough, with the electric motor adding useful punch to the engine when you need full power. When you're trundling around town, it works equally smoothly in all-electric mode.

As with any hybrid, if you're not used to such a system, it needs a small leap of faith to press the throttle and expect forward motion when the engine isn't running. However, if you keep the faith, it's simplicity itself to drive.

Last, but not least, whichever of the three operating modes (EV, D or Sport) you're in, the car switches almost imperceptibly between the various power sources.

Likewise, in our brief drive, there seemed to be no major differences between the handling of the hybrid and regular A6. It handled well enough and had decent grip.

The only real difference was the regenerative brakes, which require some getting used to, and can cause the odd heart-stopping moment when the expected stopping power doesn't materialise.

What's it like inside? Other than the dials, the hybrid is identical inside to any other A6. That means a spacious and comfortable cabin, with quality and build that are the envy of pretty much every other car maker.

The only real difference is in the boot capacity, because all the electric motor's gubbins are housed under the boot floor and significantly eat into the space which is cut to just 375 litres from the regular model's 530.

Should I buy one? Much will depend on the price of the car and that is a long way from being confirmed but even so, it looks hard to argue a case for the hybrid.

For all its space, build quality and superb engineering, it will be hard to make the sums add up. Its 44.1mpg isn't all that impressive when the existing A6 2.0 TDI averages well over 55mpg, performs perfectly adequately and perhaps most crucially looks like it will be considerably cheaper to buy in the first place.