* Only leather from bulls is now used * Hides from cows too small * 'Nose Team' tests smells... 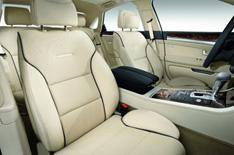 Cows are to get the push as Audi reveals its upholstery will be made only from bull leather.

Audi says the switch from cow hide to bull-sourced leather is to maintain a high level of quality.

Bulls are better
Hides from cows are too small and not as consistent in quality and condition when compared with those of their male counterparts, according to Audi.

The superior bull hides are divided into three quality zones; the back area is the best, because it's particularly even and cracks or scars are rare.

This part of the hide is used for areas where a smooth appearance and high robustness are important, such as head restraints, the shoulder area, lower seat squabs and side bolsters.

The six-member team bakes samples of leather for two hours, before testing them for unpleasant odours.

Nose Team members are chosen for their acute sense of smell, but they're also prohibited from smoking and must not give off any scents of their own during testing.