* Stop-start and weight-saving across range * Aerodynamic innovations lower emissions * But they won't go into production until 2010... 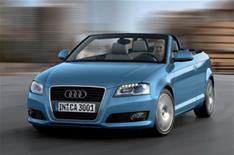 Audi is working on a range of measures to improve the carbon dioxide emissions of its vehicles.

Company officials have revealed that the firm is working on its own version of stop-start, weight-saving programmes and innovative ideas such as closing flaps on the grille when the radiator doesn't need air, all aimed at improving aerodynamics and cutting emissions.

The programme is similar to BMW's Efficient Dynamics initiative, which resulted in stop-start technology being fitted to most of the company's new cars last year. As a result, the average carbon dioxide emissions across its range dropped significantly.

However, Audi officials admit these programmes are still two years away from being put into production.

In addition, a hybrid version of Audis new A1 is also under development, but is not expected to be put into production until 2010 at the earliest.

Facelifted A3
Audi has also revealed that the front of its A3 cabriolet will differ from the hatch model when it goes on sale this spring.

With a higher bonnet and extra cushioning behind the bumper, Audi hopes to provide better pedestrian protection as well as a more modern look.

The A3 hatch will also undergo a comprehensive facelift later this year, when it will adopt the same front end as the cabrio. The company hopes this will improve the A3's pedestrian protection score in Euro NCAP crash tests from one star to three.