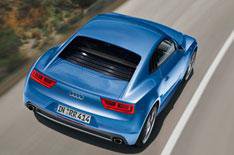 These computer images show what a smaller, mid-engined brother to the Audi R8 could look like.

Our image of the car, which is likely to be called R4 if it's given the go ahead, is based on Audi's electric e-tron concept car revealed at this year's Detroit motor show.

While electric and hybrid powertrains are being developed for this and other cars in the Audi range, the small, lightweight coupe is also certain to get conventional petrol and diesel engine options from launch, which could be as soon as 2012.

To minimise cost and maximise profits, the R4 would share the same underpinnings as the Volkswagen BlueSport roadster concept car, which was unveiled at the 2009 Detroit motor show.

The BlueSport is powered by a 178bhp diesel engine, which, given the car's low weight, is capable of blasting it from 0-62mph in 6.6 seconds and on to a top speed of 140mph.

Check out our gallery to see pictures of the e-tron and BlueSport concepts, and computer images of the R4 and baby Porsche Boxster.