More for you |
2021 DS 9 luxury car revealed: price, specs and release dateWhat is GAP insurance and how much should you pay for it?Why does the new Hyundai i10 get five stars?New MG ZS EV vs new Renault Zoe2020 Jaguar XE long-term test review
Home
News
Audi to harness power of the wind
news

Audi to harness power of the wind 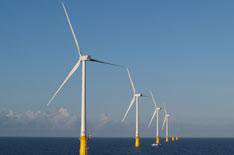 Audi plans to harness North Sea wind power to create renewable sources of energy as part of its commitment to produce cars that are CO2-neutral over their lifetime.

Offshore windmills will produce electricity to feed the all-electric e-tron cars that Audi start to build in 2013. Through a process of electrolysis, that electricity could also be transformed into hydrogen for fuel-cell electric vehicles.

The big breakthrough, as Audi sees it, is that hydrogen could also be combined with CO2 to make compressed natural gas (CNG), or methane, which would be fed into the existing energy storage grid to provide heating and power for homes as well as fuel for cars. Water and oxygen are the only waste products, neither of which is harmful to the environment.

This solution, which Audi calls e-gas, would not only take CO2 out of the atmosphere, but also use existing storage facilities and infrastructures, something which is not possible with battery-electric or fuel-cell cars.

Audi is convinced that e-gas is the only realistic solution for mass storage of renewable fuels, a view supported by Dr Michael Sterner, of the Fraunhofer Institute for Wind Energy.

Audi has bought four wind turbines in the North Sea and in July will begin to build a facility capable of turning the electricity they generate into gas.

Two of these will generate electricity for its A1 e-tron fleet while the other two will be the start point for gas production.

They will have CO2 emissions of 95g/km - about the same as a Volkswagen Golf Bluemotion - but this will be balanced by the CO2 that is absorbed in the production of the CNG to power them.

Production of both e-tron and e-gas Audis will be expanded in 2015, by which time Audi aims to have 62 windmills generating enough electricity as the base source of gas to power 40,000 vehicles.

Dr Sterner admits that for now, CNG gas production by this method is uneconomic and will need supporting with subsidies, but he believes that by 2030 up to 30% of global road transport's energy needs could be supplied this way. Ultimately, by using solar-generated electricity as well, gas could be the fuel for all road transport: just 200 square miles of the Sahara desert could create enough solar energy to supply all the power the whole world needs, he says.