More for you |
Most and least reliable family carsWhat to do if you put the wrong fuel in your carVolkswagen Passat GTE long-term test reviewNew issue of What Car? magazine on sale nowTrue MPG: most efficient SUVs
Home
News
Bank of England in car maker loan talks
news 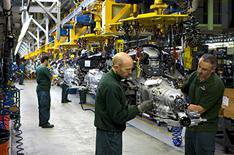 The Government wants cash from the scheme to fund the finance arms of car companies to stimulate new vehicle sales, but Mr King has so far refused.

Suggestions for a compromise scheme, involving the nomination of a bank to handle the flow of money, have been under discussion over the past week.

Car makers have been increasing the pressure on the Government to give them access to the special liquidity scheme, as sales show no signs of improving.

Lord Mandelson is in discussions with the European Union over how such a scheme would be funded and administered.