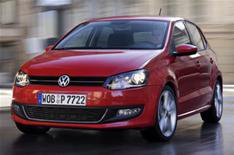 Bluemotion economy
That model announced at Geneva, to be called Bluemotion 2, will still be some months away from the showroom when the rest of the range arrives in the UK in October, but there will be a Bluemotion model from the outset.

That version will be powered by a 89bhp turbodiesel engine one of two new 1.6-litre diesels in the Polo and will have the usual Bluemotion features of longer gearing, improved aerodynamics and reduced friction.

It might not have the super-economy of the car to come in 2010, but average fuel consumption will still be 74mpg, while its CO2 figure of 96g/km is bettered only by the two-seater Smart Fortwo diesel and the new Toyota Prius hybrid.

The 1.4 will be the first Polo to offer VW's seven-speed twin-clutch automated manual gearbox as an option.