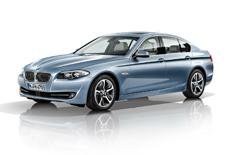 BMWs hybrid 5 Series saloon the ActiveHybrid 5 will cost 46,860 when it goes on sale in February.

The ActiveHybrid 5 has the 535is 3.0-litre twin-turbo petrol engine mated to a 53bhp electric motor. Transmission is through an eight-speed automatic gearbox.

The ActiveHybrid 5 can travel up to 2.4 miles at speeds of 37mph on electric power alone. An engine stop-start system is standard, along with an energy management system that uses data from the car's sat-nav to make the best use of energy reserves.

A combined output of 335bhp is produced by the ActiveHybrid 5 petrol engine and electric motor. The car will go from 0-62mph in 5.9 seconds 0.2 seconds quicker than a 535i automatic.

Boot capacity is cut by 145 litres, to 375 litres, to accommodate the car's larger battery housing.