More for you |
Why I bought a BMW i3: owner reviewShould a high-mileage driver buy an electric car? New Renault Zoe vs used BMW i3: which is best?Used test: BMW i3 vs Volkswagen e-GolfLondon's Ultra Low Emission Zone: everything you need to know
Home
News
BMW i3 Concept Coupe revealed
news 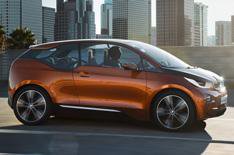 The BMW i3 Concept Coupe has been revealed ahead of its debut at the 2012 Los Angeles motor show.

It's a three-door concept car based on BMW's new i3 electric city car, which was revealed in July 2011 and is due on sale in late 2013.

Unlike the original i3 concept car, the Concept Coupe has two, rather than four, side doors. It's also 11cm longer and 2cm lower.

Although the two cars share the same overall look, the i3 Concept Coupe has slightly different bumpers and side windows, and new 20-inch alloys.

The i3 Concept Coupe also has a more production-ready interior. There's the same minimalist approach, but the i3 Coupe's centre console, steering wheel and switchgear including a version of BMW's iDrive control system look similar to BMW's current production models.

Underneath, the i3 Concept Coupe has the same electric powertrain as the first i3 concept car. Power is provided by a 168bhp electric motor that's mated to a single-speed gearbox. BMW quotes a 0-62mph time of 7.9 seconds and a maximum range of around 100 miles.

BMW says the i3 Coupe is purely a concept car and it hasn't confirmed any plans for a production version. It gives the best idea yet of how the i3 5dr will look when it goes on sale late next year, however.