* i3 and i8 unveiled * Concept cars close to production versions * More i cars planned... 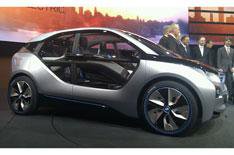 BMW has revealed the i3 and the i8, the first cars in its new eco 'i' range.

The i3 is a supermini-sized electric car that is expected to go on sale towards the end of 2013.

The i8 is a hybrid sports car that will go on sale a year later.

For more information on the cars, read the following articles:
BMW i3: photos and details
BMW reveals i8 hybrid sports car

While the two cars are billed as concept vehicles, BMW board member Ian Robertson says the final cars will look 'pretty close' to these concept versions. Both will have their public debut at the Frankfurt motor show in September.

BMW hasn't revealed sales targets for either car Robertson said customer demand will decide the numbers of cars made at the company's Leipzig factory and that 'factors outside of BMW's control such as congestion charges in cities would be key influences on demand for the cars'.

Prices for the cars have yet to be revealed, but Robertson said that all i models will be sold, leased and pushed through 'new channels', such as the internet and on smartphone apps. BMW is also testing car-sharing schemes.

The i sub brand was unveiled in February this year and more i models are planned. 'Three is not the lowest number and eight is not the highest number, and there are a lot of numbers inbetween' said a BMW spokesman.