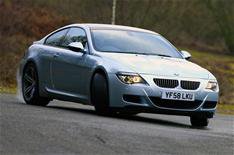 BMW will launch a high-performance M version of its 6 Series next year.

The car will have the same 552bhp twin-turbo V8 engine that powers the M5 saloon.

It's thought the new M6 coupe won't have the carbonfibre roof found on the previous version, instead it will use more aluminium - again like the new M5.

The new M5 is much more refined and comfortable than its predecessor, and we'd expect those characteristics to be carried over into the new M6,

The M6 will go on sale next summer. Prices haven't been revealed, but we'd estimate it will have a price of at least 85,000.