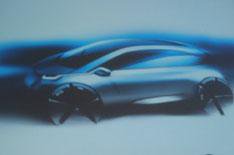 BMW has revealed the first sketches of its Megacity Vehicle (MCV), the company's electric car that is scheduled to go on sale in 2013.

The MCV is a four-seat, rear-engined, rear-wheel-drive car, which houses the batteries that power the 100Kw motor underneath the floor.

BMW says it will be bigger than a Mini, but smaller than a BMW 1 Series, and comparatively tall.

BMW believes the MCV will be the world's first custom-made electric vehicle. The likes of the Nissan Leaf and Vauxhall Ampera are conversions of existing cars.

To counteract the relatively heavy weight of the car's batteries, the MCV will have a lightweight carbonfibre cell. BMW has gone into partnership with an American company to set up a carbonfibre production plant in Washington state.

As its name suggest, the MCV will be a car for urban dwellers. BMW expects the car to have a range of between 100 and 130 miles, a useable boot and its flat floor could mean the car will have a flexible seating layout.

The MCV will be marketed as a premium product under a sub-brand of BMW perhaps similar to the 'M' sub-brand it has for its sports models.

BMW's chief designer Adrian Van Hooydonk says the final design of the MCV has yet to be signed off by the BMW board, however the head of the MCV's design team Benoit Jakob confirmed BMW 'will close the design process soon.' So, expect much of the sketches' looks to remain for the production car.