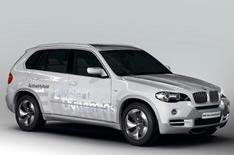 BMW will unveil a new concept car at the Geneva motor show next month, which showcases its green technology of the future.

The Vision EfficientDynamics concept car is a hybrid X5, powered by a 2.0-litre twin-turbocharged diesel engine and lithium-ion batteries. Power is transferred to the wheels via an eight-speed automatic gearbox.

It achieves an average of 43.5mpg and emits 172g/km of carbon dioxide. BMW says that performance hasn't been sacrificed in the pursuit of lower emissions - the car can go from 0-62mph in 8.9sec.

The car also has solar panels on its roof which generate power to pre-heat the diesel fuel, reducing the time that the engine takes to warm-up.

Even the alloy wheels have green credentials, claims BMW - the spokes have been designed to reduce wind resistance.

The Geneva motor show opens to the public on March 6.