BMW to recall thousands of cars 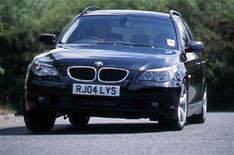 BMW is to recall more than a third of a million cars around the world as a result of possible brake problems.

More than 11,000 of the cars affected are in the UK, and the concern centres on the brakes. In the affected vehicles, says BMW, a leak may develop in the power braking system, potentially causing a vacuum loss and consequent reduction of power braking assistance.

However, the company says that the vehicles are not unsafe, as mechanical braking is still available to slow and stop the vehicle. There have been no reported accidents or injuries as a result of the potential problem.

BMW has said it will write to owners of the affected vehicles, but any BMW owner who is concerned about their car should phone the company's customer service department on 0800 325600.