* New seven-speed gearbox option * Gearchanges are faster and smoother * Available on M3 variants for about 2500... 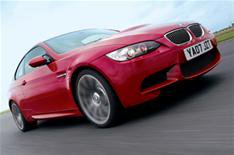 The dual-clutch technology is similar to the system used in Volkswagen's DSG gearbox, and works by engaging the next gear before you select it, saving time and making changes smoother.

The driver can opt to change gear using a traditional gearlever or via paddles located behind the steering wheel.

In addition, the system improves fuel economy and features a Low-Speed Assist function that makes the car easier to manoeuvre at speeds of less than 5mph.

M DCT will initially be available on the M3 cabriolet as an option, priced from around 2500, then to other M3s.