* One in five can't parallel park * We hate parking in public * Women quicker to give up... 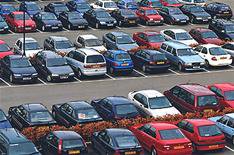 Having difficulty when reverse parking is one of the reasons most people fail their driving test and it appears that this skill doesn't improve with time.

A new survey suggests that nearly 20% of drivers can never or rarely parallel park; 67% admit to having given up and driven away, while 22% have got someone else to park for them.

Stress levels rocket when another driver 'steals' a space, according to the research from car insurer elephant.co.uk, and for nearly one in five drivers this has led to an argument.

Parking under pressure can lead to performance anxiety. An audience watching from the kerb makes it harder for two-thirds of drivers to park, while keeping another driver waiting stresses nearly 75% of drivers.

Women are more likely to admit parking defeat than men, with three-quarters having given up altogether on a parking space compared with half of men.

Women are also more likely to hand over the keys and get someone else to park for them: 28% compared with 12% of men.