More for you |
Every 5-star car on What Car?Used test: Maserati Levante vs Porsche MacanNew issue of What Car? magazine on sale nowMost and least reliable small SUVsRevealed: the car makers whose discounts have got bigger since lockdown
Home
News
Car aid scheme fails to pay out
news 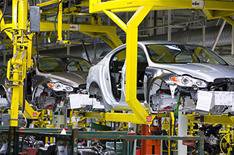 A Government scheme set up in January to help UK car makers is yet to give aid to a single company, a committee of MPs has revealed.

The 2.3 billion Automotive Assistance programme (AAP) was set up to provide funds for investment in future green technologies.

The failure of the scheme to provide such funding has been described as a 'wasted opportunity' by the Business, Innovation and Skills Select Committee.

Long-term investment
The Department for Business, which is administering the AAP, claimed it was already working with 10 firms on projects worth about 2 billion through the scheme.

A spokesman for the department said: 'It is important to understand that the AAP is about long-term investment projects, rather than short-term rescue.

'We have to work at the pace demanded by the companies and also have to consider the best interests of the taxpayer.'

Scheme criticised
Critics of the scheme have said that its conditions are too rigid to help many firms develop future technologies.

Peter Luff, Chairman of the Select Committee said: 'When it was announced, AAP represented a genuine opportunity to help the automotive industry, but it is now December and not a single loan or loan guarantee has been made.

'It is up to the Government to prove us wrong, but they must ensure that funds are released to companies very quickly.'

Scrappage boosts car sales
Despite the lack of funds from the AAP, the car industry has experienced a recovery in sales thanks mainly to the UK's scrappage scheme.

The success of the scrappage scheme is illustrated by recent figures that revealed new-car sales increased by 57.6% in November compared with the same period last year.