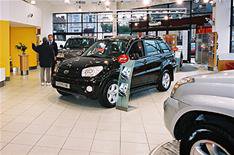 Figures from the Society of Motor Manufacturers and Traders (SMMT) have revealed that the number of new cars sold during May was 134,858.

The 24.8% fall in sales marks the 13th consecutive drop in new car sales, while new car registrations for the year so far are down by 27.9%.

However, the statistics do not include the full impact of the Government's scrappage scheme, which did not come into force until May 18.

'We have seen an encouraging start to the scrappage incentive scheme with 35,000 orders being placed since it was announced, although it will take time to feed into registration figures.'

Top ten sellers in May
Smaller cars have continued to buck the trend, with the sector seeing continued volume growth, up by 50.3%. The Fiesta is again the top-selling car for the month and year to date.