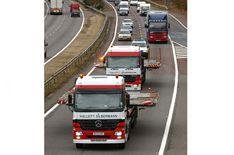 Lives could be saved by changing the Highway Code, says the Freight Transport Association (FTA).

Crashes, deaths and injuries could be avoided if drivers were more aware of their responsibilities around lorries, according to the FTA.

The truckers' association has called on the Department for Transport to change the Highway Code to help address the lack of understanding.

The Highway Code currently advises drivers on how to behave around other cars, cyclists and motorcyclists, says the FTA, but it ignores lorries.

There were 10,688 accidents involving lorries in 2007, 461 of which involved serious injury or death.

Truckers tired of being made scapegoats
James Hookham, the FTA's policy director, said: 'It's unfair to make lorry drivers the scapegoat. Whenever there's an accident, or even a near miss, involving a lorry, the common assumption is that the HGV driver is at fault.

'How many of us are aware of how much clearance we need to give HGVs when we are overtaking, or how much distance do we need to keep to enable a lorry driver to see us?'