* BYD could be Europe-bound * Announcement at Geneva show in March * Electric vehicles in pipeline... 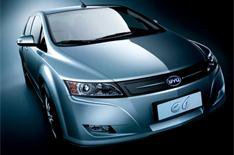 China's fourth-largest car maker could be on the verge of selling cars in western Europe. An announcement will be made at the Geneva motor show in March.

BYD Auto (the initials stand for Build Your Dreams) already has production facilities in Romania and Hungary supplying cars to countries outside the European Union, backed up by support sites in Denmark, Finland, Germany, Holland and Russia.

Biggest car maker by 2025
Now, it is believed to be looking to expand west to help it achieve its goal of becoming the world's largest carmaker by 2025.

BYD already has a range of petrol, electric and plug-in electric vehicles, plus the world's first dual-mode car that serves as an all-electric car for city driving and a petrol-electric hybrid when a longer range is needed.

e6 revealed
At the Detroit show, it announced an all-electric car capable of going 205 miles on a single charge. It is called the e6 and is a 4.5-metre five-door hatchback with a top speed of 87mph. It has a 60 kilowatt lithium-ion battery pack and twin electric motors, but weighs two tonnes

BYD plans to start selling it in America in limited numbers later this year and eventually to set up research and production facilities to make it there.

BYD was established in 1995 to make batteries for Nokia and has since expanded into other branches of the communications and electronics industries. It produced its first car in 2005. In 2009, it sold 450,000 cars in China and this year has plans to shift 800,000 worldwide.