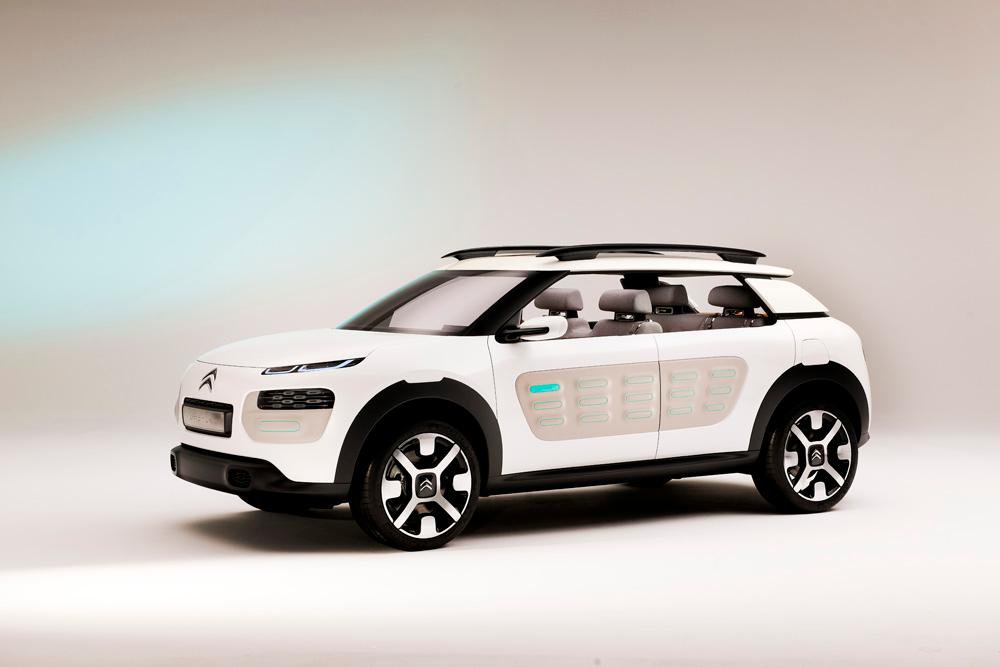 This is the Citroen C4 Cactus, a preview of a style-led family hatchback that will go on sale next year.

The Cactus is designed to show how Citroen plans to develop its 'C Line' of vehicles – in effect, all cars that don't wear the DS badge. While the new model will carry the 'C4 Cactus' name and be sold alongside the existing C4 for a few years, high-ranking Citroen officials admit that in the longer term, the Cactus's ethos of simplicity and comfort will be the company's focus instead of conventional hatchbacks.

The Cactus is 4.21 metres long – around three centimetres shorter than a Volkswagen Golf. It has a high floor and ride height but its seating height relative to the ground is around the same as that of a Citroen DS3 supermini.

The production car will add side windows and rear glass over the concept's fully open set-up, but its basic look will stick closely to those of the car in these images. The show model's most radical external feature is 'Airbump', a side panel of air-filled plastic that's designed to offer better protection from urban bumps and scrapes. Indeed, during the texture's development, Citroen engineers evaluated its performance by pushing a shopping trolley filled with car batteries against the side of the car.

Airbump will be standard on all C4 Cactus models; it will be available in a variety of colours, allowing the buyer to choose either a finish that sticks closely to the shade of paint, or one that offers a striking contrast. In the longer term, Citroen may consider offering Airbump replacements at its dealer network, allowing second-hand car buyers the chance to personalise their newly purchased vehicle.

Many of the concept's other exterior features, including extended wheelarch linings and high-mounted daytime running lights, will make production.

The concept's cabin has a number of radical features, particularly up front, where there's a single 'bench' seat and just a handful of dashboard buttons. Citroen designers say the bench seat is designed to feel like a sofa and be more 'social', encouraging conversation between the front passengers and freeing up space. Citroen has yet to specify precisely how this set-up will be adapted for production but it's likely that the front two seats will be able to move independently of each other. The front armrest of the concept car is likely to be offered as an option.

A single central screen that controls all major functions, from music and phone connectivity to sat-nav and air conditioning, has cut down on the number of buttons needed. This will be integral to the C4 Cactus's dashboard set-up and will be standard on all models. A simple analogue pod could replace the show car’s small digital instrument display on lower trim levels, however.

The only physical switches are a simple set for the car's automated manual transmission – Drive, Park and Reverse – and an emergency warning lights button that's required by law. A regular five-speed manual gearbox will be offered on the production car, incidentally.

Other elements of the cabin, most notably the extensive use of leather finish and 'straps' for the doors and top-mounted glovebox that are designed to evoke memories of old-fashioned luggage sets, are less likely to feature on the standard equipment list of the production car. We'd expect them as options, however.

The C4 Cactus will sit on the same chassis parts as the newly launched C4 Picasso, and it's likely to feature that car's line-up of engines, including 1.6-litre diesels and petrols. The show car features Citroen's innovative Hybrid Air technology, which uses compressed air and hydraulics in the engine to deliver hybrid levels of economy without the need for heavy battery packs. The set-up, which Citroen claims is good for more than 90mpg in the Cactus, is likely to make production, albeit at the very top of the range.

Citroen has yet to even hint at a price for the car, but company boss Frederic Banzet has told What Car?, "The focus is sophistication and simplicity, not cheapness." In fact, we'd expect the C4 Cactus to be at least as expensive as the regular C4, with a starting price of around £14,000.