* Fully operational electric racing car * 0-62mph in under 5secs * Up the hill at the Goodwood Festival of Speed... 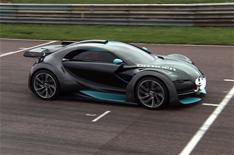 The Citroen Survolt might look like a static motor show concept car, but beneath the curvaceous carbonfibre bodywork lurks a fully operational racing car.

It's lighter than a Ford Focus, and has a combined output of 300bhp from its two electric motors. These blast the Citroen from 0-60mph in less than five seconds.

The Survolt cost Citroen more than 1.5 million to design and build.

See the electric racer in action when What Car? used car editor Matt Sanger took it up the hill at last weekend's Goodwood Festival of Speed.

Citroen Survolt at the Goodwood Festival of Speed