As the most successful passenger carrying van in the UK, the Citroën Berlingo is a bit of a phenomenon. The versatile Berlingo MPV has been grabbing sales for decades as a family runabout, and indeed is currently our reigning MPV champion.

Still fusing family-friendly versatility with business-boosting space, the front half of the latest Berlingo van shares its underpinnings with many Citroën and Peugeot car models – including the C5 Aircross and 5008 SUVs – while the rear remains the same as the previous Berlingo van.

There’s a choice of entry-level X or a more upmarket Enterprise trim level. There's also two special versions; Worker is designed for those likely to go off-road, while Driver caters for buyers who will cover long distances.

The Berlingo Van is available in two lengths, either standard (M) or long (XL), as well as in a crew cab version that can move five people including the driver. You’ll get a five- or six-speed manual gearbox as standard, depending on which engine you opt for. There is also an option of an eight-speed automatic gearbox, but only on the most powerful diesel engine.

In terms of rivals, the Berlingo has to compete not only with its badge-engineered siblings, the Vauxhall Combo Cargo and Peugeot Partner, but also against the very successful Ford Transit Connect, as well as the popular Volkswagen Caddy and Renault Kangoo vans. In this review, we'll tell you if it succeeds. 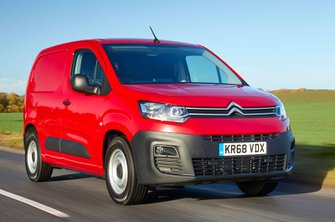 The Nissan NV200 is a surprise package, with load carrying cap...