Dangerous driving on the rise 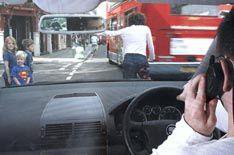 Nearly 70% of UK drivers admit to having dangerous driving habits.

Potentially fatal driving habits are on the increase, too, with research from Sainbury's Car Insurance revealing an increase of 4% compared with results from last year.

Eating or drinking while driving was the most common bad habit, which was admitted to by 43% of those asked, while 9% of drivers confessed to getting behind the wheel after having an alcoholic drink and 10% said they had driven 'the morning after the night before'.

There's good news for seatbelt campaigners, though, with a 3% reduction in those driving without strapping in.

Lucy Hunter, Sainsbury's Car Insurance manager, said: 'Unfortunately many motorists get distracted too easily while driving and don't consider the possible consequences of their actions.

'We urge motorists to concentrate at the wheel and not be tempted to engage in anything that could distract them.'