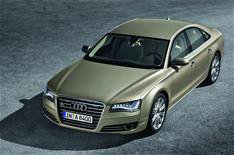 Hybrid-beating Audi A8
Audi chief Rupert Stadler says he is confident that diesel versions of the company's new aluminium A8 flagship saloon will be capable of competing with any rival including hybrids in the fuel economy and CO2 battle. 'We look forward with confidence to the comparisons,' he added. 'It fully meets the requirements of a green luxury brand.'

Focus to pip Fiesta
Ford of Europe chairman John Fleming believes the new Focus, unveiled at the Detroit motor show, will be capable of reclaiming top spot in the UK sales charts from the Fiesta. 'The market last year was distorted through scrappage and I think the Focus can become number one again but the economy needs to recover first,' he said. 'Hopefully the Fiesta will be number two.'

Hyudai's weight loss
Hyundai announced a commitment to cut the weight of its cars by 10% by 2015 at the Detroit show.

VW aims for the top
Volkswagen will launch 16 new cars in 2010, including replacements and upgrades, says the company's head of sales and marketing, Dr Christian Klingler. The group which includes Audi, Bentley, Bugatti, Seat, Skoda and now Porsche sold just under 6.3 million vehicles in 2009 and is the third-largest car maker in the world, but it is not satisfied with that it wants to be number one by the end of the decade.

Hint of CLS Coupe
Mercedes-Benz revealed a sculpture of what appears to be a car underneath a flowing dust sheet at Detroit, but it did not deceive anyone.

It's a big hint as to the look of the next CLS four-door coupe that will be shown either at Paris in the autumn or at Detroit next January. 'We wanted to show that there are more beautiful things to come from Mercedes,' said chief executive Dr Dieter Zetsche.

114 paint options for Bentley Mulsanne
The Bentley Mulsanne will offer customers a bewildering choice of colours and trims when it goes into production at Crewe this summer. There will be 114 different paint schemes, 21 carpet colours, nine wood veneers and 24 leather hides on the list buyers will have to pick from.