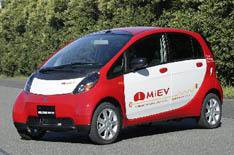 Electric vehicles have a major role to play in reducing transport emissions by 2020, according to the UK Governments Committee on Climate Change (CCC).

It says meeting the targets can be achieved using existing technologies and by putting policies in place to support the move to a low-carbon economy.

Lord Adair Turner, chair of the CCC, said: 'The reductions required can be achieved at a very low cost to our economy; the cost of not achieving the reductions will be far greater.'

He targeted electric cars as having the potential to play 'a significant role in the new car market' either as plug-in hybrids - mated to petrol or diesel engines - or as pure electric vehicles.

The CCC conceded that battery technology was currently restricting the widespread introduction of electric cars, but highlighted imminent vehicle launches such as Mitsubishi's electric i car, GM's Volt and Toyota's plug-in hybrid as showing what can be done in the future.

The report also ruled out hydrogen power as a method to help reduce emissions due to the shortage of low-carbon sources of the fuel, and the absence of a suitable supply infrastructure.