More for you |
Electric car waiting times revealedCoronavirus advice: How do I renew my car's tax if its MOT has expired? Best small cars 2020Past Master: Audi TT Mk1Coronavirus advice: how to contact What Car?
Home
News
Electric/plug-in car grant to go ahead
news

Electric/plug-in car grant to go ahead

* 5000 incentive will launch in 2011 * Allays fears of it being scrapped * Green light comes ahead of spending review... 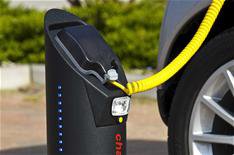 The 5000 Government payment towards the price of an electric or plug-in hybrid car will go ahead next year.

There had been concerns that the grant would be scrapped as part of wide-ranging cuts to be detailed in the comprehensive spending review this October.

A statement from the Department for Transport said: 'Exceptionally, the Government has agreed the announcement of this incentive ahead of the completion of the spending review to support the early market for ultra-low-carbon cars.'

The Mitsubishi i-MiEV city car will cost 33,699 with the grant, while the larger Nissan Leaf, due in February next year, will cost 23,500 with the incentive.

In all, 43 million is available for the first phase of the scheme up to March 2012 enough for 8600 cars. The full 5000 is available as long as it does'nt exceed 25% of the list price of the car, something that doesn't affect any of the current or forthcoming models.

The discount will be applied at the point of sale, so car buyers won't have to pay the full amount first and then claim the money back. There is no limit to the number of cars you can buy and receive the incentive on, and the scheme is open to both private individuals and companies.

Cars will have to meet safety and performance criteria
Anyone wanting to claim the grant will have to buy a car that meets the following criteria:
• It must be a car not quad bike-based vehicles such as the G-Wiz;
• Emit a maximum of 75g/km of CO2 if it's a plug-in hybrid;
• Have a minimum range of 70 miles if it's an electric-only vehicle;
• Have a minimum battery-powered range of 10 miles if a plug-in hybrid;
• Have a three-year or 75,000-mile warranty;
• Have a three-year warranty on the battery or a five-year warranty if requested by the customer;
• It must retain 'a reasonable degree of performance after a three-year period of normal use'.

Find out more about electric cars and plug-ins
Type 'electric' or 'plug-in' into our search box and you'll find lots of information on electric cars on whatcar.com, from first drives and videos to announcements on new electric models.