* Autonomous Emergency Braking.. * to be included in safety body's ratings * Claims that the tech cuts accidents by 27%... 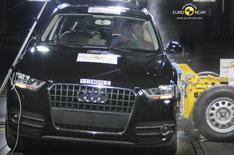 Euro NCAP will recognise the inclusion of Autonomous Emergency Braking (AEB) systems when awarding its crash-test ratings from 2014, in a bid to ensure more manufacturers fit it to new cars.

AEB warns the driver when it believes the vehicle isnt stopping quickly enough, before either enhancing the driver's brake response or by applying them independently.

Research suggests AEB can cut accidents by up to 27%, and Euro NCAP wants it fitted as standard to all new cars sold in Europe.

Currently, just a third of car makers offer such systems, and these are mainly in the premium sector, including manufacturers such as Audi, Jaguar, Land Rover, Lexus and Mercedes-Benz.

However, use of the technology is becoming more widespread, and can be found on mainstream models such as the Ford Focus, Honda Civic and Mazda CX-5.

Fiat is also expected to make AEB a low-cost option on the new Panda in July 2012.

Euro NCAP boss Michiel van Ratingen said: 'A faster penetration of these technologies into new cars will make it more realistic for the European Union to reach its target to cut road deaths by 50% by 2020.'