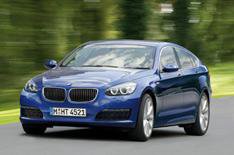 These computer-generated images show how BMW's Progessive Activity Sedan (PAS) could look when it goes on sale in 2009.

The PAS is based on the same platform as the 5 Series and is designed to fill the gap in BMW's line-up between its estates and luxury 4x4s.

It sits slightly higher on the road than a coupe, but isn't as tall as an MPV or 4x4.

There has been no official confirmation of the engine range, but it is expected to closely mirror the existing options for the 5 Series.