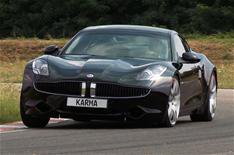 Fisker will unveil the next version of its Karma range-extended electric car at the Frankfurt motor show.

This model will go on sale in 2012, but the company has ambitious model plans for the following five years.

There will be a smaller BMW 3 Series-sized saloon, codemamed Project Nina, in 2013. This will be the first Fisker to use BMW's turbocharged four-cylinder engines.

It will also use a Fisker-developed multi-speed gearbox instead of the one-speed direct-drive system that the bigger Karma uses. Fisker is exploring two- and three-speed options. The new gearbox will allow Fisker to fit one electric motor instead of the two that the Karma needs. This will improve packaging and help make the Nina saloon roomier than the Karma, despite it being smaller.

All versions of the Nina will be available in right-hand drive form - the Karma saloon and the car which is going to be unveiled at Frankfurt are left-hand-drive only.

A Karma-based convertible, which will be called the Karma Sunset, follows in late 2013. It will have a folding metal roof and will look almost identical to the concept car unveiled at the Detroit motor show. It has a shorter wheelbase than other Karmas and will be the most expensive model in the Fisker range and the first Karma-based model that will be offered in right-hand drive.

A Nina-based compact SUV will follow in 2014. This will have the raised seating position that SUV buyers love, but will be far more aerodynamic than the SUVs of today. It will also have a much sleeker appearance.

This will be the first Fisker offered with the option of four-wheel-drive, which is likely to come from BMW. Fisker is open to letting BMW use its electric motor technology as part of the deal.

A Nina Convertible in 2015 is pencilled in for 2015 and while few details are known at the moment, it will use the same BMW engine and multi-speed gearbox as the Nina saloon and SUV.

All-new Karma saloon in 2017
Like the current Karma, and all-new Karma in 2017 will be an electric car with an engine as a back-up generator. However, this is likely to be a flex-fuel engine that can run on a mixture of petrol and ethanol, reducing tailpipe emissions.

Fisker also says that it will upgrade the technology in its cars far more often than mainstream manufacturers. For example, it has just fitted a new silencer to the Karma saloon following criticism that the car was too noisy with the engine running. This silencer will be retro-fitted to cars already delivered to customers.