* Brilliant executive express * Has it lost some precision? * On sale from March... 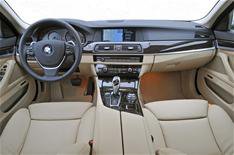 The swoopy new 5 Series is 4cm longer than the previous version and uses a shortened version of the chassis that underpins the 7 Series luxury car. This means there's a bit more space for all occupants, including a decent increase in rear legroom.

There's plenty of shoulder room, too, certainly enough for BMW to claim that the car is a genuine five-seater. Unfortunately, a huge central tunnel runs the length of the car, which means anyone sitting in the middle of the rear bench will certainly know they've drawn the short straw. There's a 520-litre boot behind, so there's enough room to accommodate everyone's luggage, too.

It's bigger, then, but not heavier. The doors and bonnet are aluminium, and the car is 23kg lighter than the old one. It's also claimed to be a mammoth 55% stiffer. As we've found, that stiffness makes the car precise to drive, but it also makes the car stand up better in a crash. The new 5 Series is also kinder to pedestrians thanks to
a spring-loaded bonnet that provides additional cushioning in the event of a collision.

The interior is nothing short of luxurious. At the heart of the dashboard is the latest iDrive controller, which lets you navigate between myriad menus, including navigation, telephone, ventilation, and a whole lot more if you raid the options list. The materials used throughout the cabin are of very high quality, and the fit, finish and attention to detail are the work of obsessed minds.

So, as we said, Audi, Jaguar and Mercedes will be worried about what the month of March is about to bring. You don't have to be a soothsayer to work out that they're in for a hard time.