More for you |
Used Ford Fiesta long-term test reviewWhat can I do about a security issue on my car? Best cars for less than £250 per monthWhy is my new car’s fuel economy so poor?Top 10 used electric cars
Home
News
Footie fans driven to distraction
news

* Football matches a dangerous distraction * 2 million near misses or accidents listening to sport * Men more likely to be distracted than women... 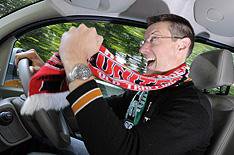 Listening to football matches while driving can be a dangerous distraction, according to research commissioned by insurer Esure.

The company is warning drivers to think twice before tuning into tonight's Champions League final.

Researchers asked football fans to drive in a simulator while listening to a game on the radio.

The study concluded that the pace of the game, the number of incidents and goals scored affected drivers' behaviour and concentration levels.

When listening to a match, drivers' speeds varied more, and they allowed themselves less stopping distance to the car in front. Fans tended to drive more quickly at contentious or exciting moments in the game.

Control drivers with no interest in football drove more consistently, with or without the radio on.

In addition to the laboratory study, a survey of motorists suggests that as many as 2 million of us may have had an accident or near miss while listening to the radio. The survey also showed a gender divide, with 14% of men admitting to being distracted while listening to live sports, as opposed to 9% of women.

Professor Michael J. Pont of the University of Leicester, said: 'The results we obtained suggest that, particularly during high-pressure situations within games, there was a very marked impact on the behaviour of the subjects in this study.

'It is concluded that where possible football fans should ask someone else to drive during important matches such as the Champions League final.'