* Our favourite cars from LA show * The cars UK buyers should keep an eye on * Ford Escape is new Kuga... 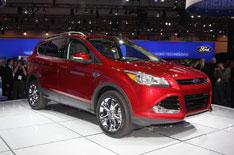 Forget the name; Ford's mid-size SUV is here with its US badging, but it'll become the Kuga when it reaches UK dealers in 2012. It's larger than the outgoing model (around 10cm longer), but still a definite five-seater.

The Escape/Kuga is based on underpinnings from the Ford Focus, and the relationship extends to common engines including 1.6- and 2.0-litre turbocharged petrol engines. There will also be 1.6- and 2.0-litre diesels in the Kuga; unsurprisingly for petrol-loving US customers, the Escape is unlikely to get these engines.

The cabin will feel familiar to Focus owners; the dashboard and much of the switchgear are clearly related to the family hatchback. In particular, the bold central console takes the mobile phone-inspired layout (first seen on the Ford Fiesta) to new extremes.

Neat tricks include an electrically operated rear hatch that can be operated 'hands-free' by waving your foot under the rear bumper. The car detects the key in your pocket and opens the hatch; it should be a boon for those laden with shopping.

There are question marks over the styling, though; the car was apparently designed in Europe, but it's very much a US-influenced look. It remains to be seen if there's enough European appeal to live up to the Kuga badging.