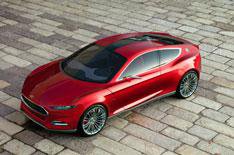 This is the Ford Evos concept car, which will make its public debut at the Frankfurt motor show. The four-door, four-seat fastback showcases Fords new design direction and technology that could filter down to its production cars.

Many of the Evoss styling themes will inform Fords next generation of models. The front, in particular, shows the new face of Ford. The two most distinctive elements of this are the slim laser-cut headlights and high trapezoidal grille.

Martin Smith, Ford's executive design director for Europe and Asia Pacific, says that developments in lighting technology have made it possible to reduce the size of both the front and rear lights, giving a neater look. As well as being more aerodynamically efficient, the higher-set front grille creates a more confident, premium appearance, he says.

Although it looks like a three-door coupe, the Evos has four gullwing doors, which open upwards to reveal a futuristic four-seat interior. The dashboard has a minimalist look, while the drivers seat is in a contrasting red colour to emphasise the cars fun-to-drive character.

Although its a similar length to a Focus, the Evos is as wide as a Mondeo and lower than both, creating a low-slung, sporty look. Underneath, it has the same plug-in hybrid powertrain as the C-Max Energi, which will be launched in the UK in 2013.

Ford says that the Evoss cloud connectivity features arent fantasy; they could be available in production cars over the next few years. Using a combination of stored driver information and the latest weather, traffic and location data, the car adjusts the way the powertrain and chassis react. It can also automatically stream appropriate music, pre-heat or cool the car and wirelessly communicate with devices in the home, Ford says.

Ford has no plans for a production version of the Evos. A coupe model isnt due in the foreseeable future, but Ford sources told us that the next evidence of its new design direction will be seen at the Detroit motor show in January 2012. That is expected to be another concept car, which will strongly influence the design of the next Mondeo, due around 12 months later.