Long considered to be the best small hatchback on sale thanks to its dynamism, simplicity and peppy engines, we find out if the new Ford Fiesta can continue that 40-year-long legacy...

The Ford Fiesta is more than 40 years old, and since the original model went on sale in 1976, more than 17 million have been shifted from dealership forecourts. To put that into context, imagine every single person in a country the size of the Netherlands driving one. Unsurprisingly, the previous Fiesta was Britain's best-selling new car from its launch in 2008 until it went off sale a few months ago.

Regardless of if you owned the unassuming, boxy first-generation in the late 1970s and early 1980s, the curvy Mark 4 and 5 Fiestas of the 1990s or the angular iteration of the 2000s – all Fiestas followed a simple remit: be easy to live with, fun to drive, frugal and filled with the latest safety tech and conveniences.

So, now there's an new version of the Fiesta, and this seventh-generation model faces off against mighty rivals including the current class-leader, the Seat Ibiza, the re-invigorated Nissan Micra and the latest Volkswagen Polo.

Ford claims this Fiesta is all-new, but in reality it's more of an evolution of the previous car; it's based on the same platform as the old model, although this has been strengthened and the wheels have been moved closer to the corners in order to make the Fiesta's handling yet more agile. The new model is also wider and longer than its predecessor, so it should have more space inside.

One of our few criticisms of the previous Fiesta was its rather drab interior, which was crammed full of buttons and had a complicated, outdated infotainment system. Ford has followed its rivals and opted for a less button-heavy design this time around, and my first impressions of it are good. You notice straight away how uncluttered the centre console is – it's now dominated by an 8.5in touchscreen infotainment touchscreen (included as part of the Bang & Olufsen stereo package) and clear, concise air conditioning controls.

Even the instrument panel has been simplified and given greater clarity, with the dials no longer encased in individual housings. Plus, they have a new 5.0in driver's information screen – similar to the one in the larger Ford Focus – between them, allowing you to view your trip information, fuel economy or speed, configure the car’s settings or check the tyre pressures, all at a flick of a button. 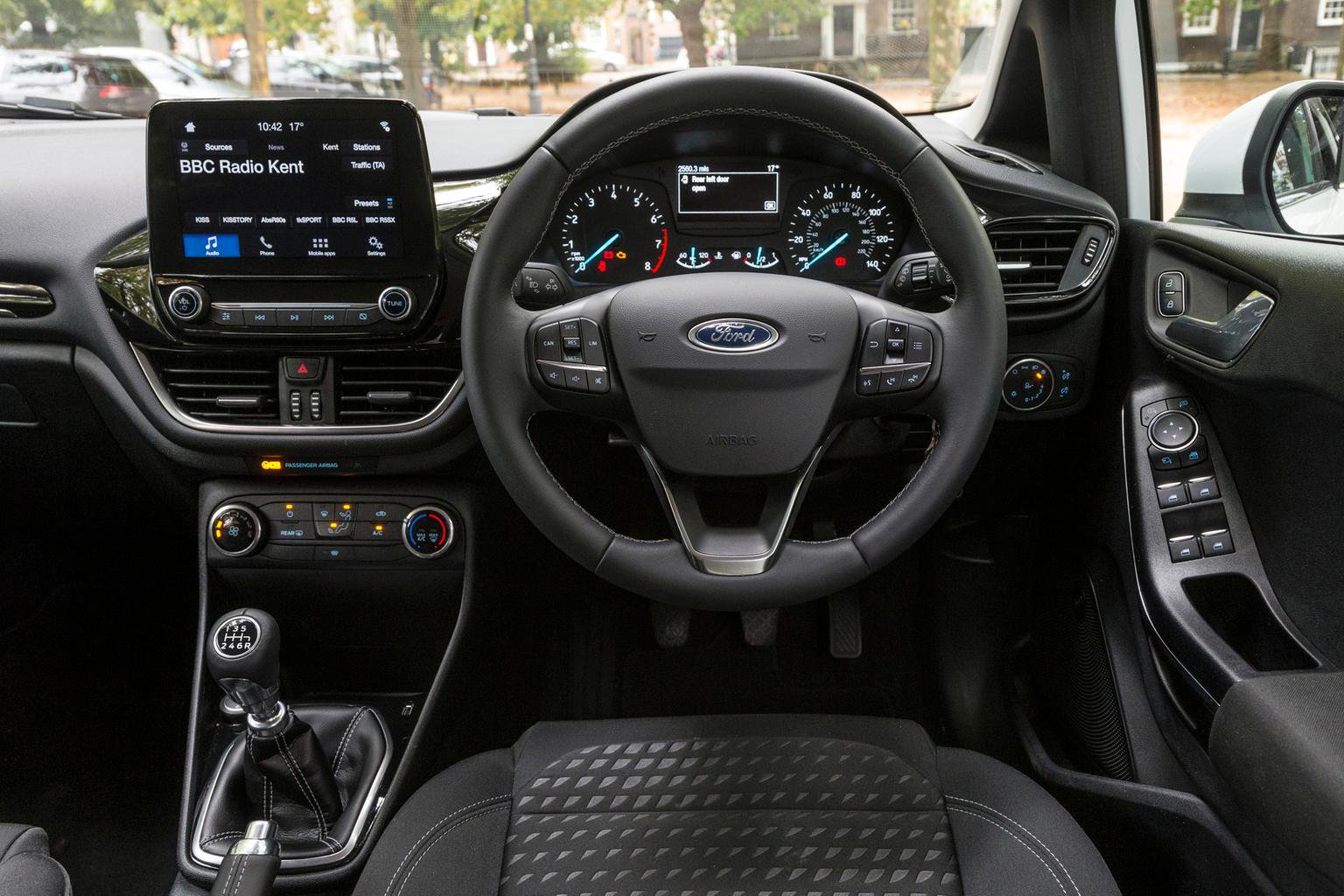 We've opted for the brilliant 99bhp 1.0-litre Ecoboost petrol engine in our Fiesta, teaming it with our recommended mid-range Zetec trim. Ford has resisted any temptation to mess with a winning formula in the shape of its three-cylinder motor, and on our early journeys it has provided zesty performance to match the typically well-weighted and joyous handling characteristics that make the Fiesta the dynamic benchmark in this class.

Zetec trim equips the Fiesta with touches of chrome, foglights and LED daytime running lights on the outside, while inside a leather-trimmed steering wheel and handbrake give the driver a touch of luxury. It does omit sat-nav, but that can be easily rectified by using the Apple CarPlay or Android Auto smartphone mirroring functions to display a sat-nav app from your phone on the car's infotainment screen.

So, the Fiesta has made a strong first impression, with its improved interior, peppy three-cylinder petrol and sweet, well-judged handling, but I do wonder whether that's enough, considering the innovations that rivals such as the Ibiza are now offering. We have the next six months to see if the new Fiesta can carry on its winning legacy.