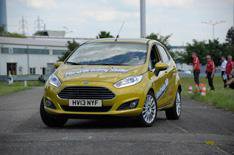 Ford is launching a driver-training programme to help educate young motorists who are at the greatest risk of being killed or seriously injured on the UK's roads.

The free training, called Ford Driving Skills for Life, is aimed at young drivers aged 17-24 who have passed their test.

Ford launched its driver skills training in America in 2003, while it also runs similar schemes in Asia. It has given hands-on training to 100,000 motorists so far, with a further 500,000 getting online tuition.

The UK scheme has been developed in conjunction with the AA and the Royal Society for the Prevention of Accidents. The AA is providing the instructors for the project.

Ford's UK managing director, Mark Ovenden, said: 'It is a programme that is designed to build on what drivers do in their test, and to get them to understand their vehicles and what causes accidents.'

Training will focus on four key areas: hazard recognition, vehicle handling, speed/space management and distractions. It will be partly classroom based, but will also involve driving on a closed track as well as public roads. The distraction training is expected to get participants to see how much texting and listening to music affects their driving.

Drivers taking the course will use Ford Fiestas and Focuses to start off with, but Ovenden did not rule out the possibility of using larger cars in the future. However, he said that the scheme will not be used as a method of marketing cars to young drivers and that it is being funded by Ford's charitable arm, which is a separate company. He said there will be 'no commercial pressure' at all on participants.

Ford is putting 1.2m into rolling the scheme out across Europe, and expects to train up to 300 drivers in the UK next year. However, Ovenden said Ford will be able to train 'thousands' of drivers each year when the scheme is fully up and running.

It will launch in September, with the first six training centres set to be located at or near universities and colleges in areas where there are high fatality rates among young drivers.

For more information and to register interest, visit www.forddsfl.co.uk.