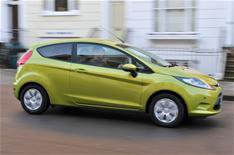 We tested the system on an American Ford Fusion, but it could arrive in the UK as early as next year.

What does it do? The system lets an administrator insert keys into the car's ignition, where they can be programmed with customised restrictions for individual drivers.

The top speed of the car can be limited by the engine-management system probably to around 80mph, as it is in the US.

There's also a speed warning which was absent from our test vehicle that can be set at 45, 55 or 65mph to warn drivers as their speed builds.

A stereo control can be used to limit the audio system to 45% of its total volume, leaving it loud enough to hear, but not distract the driver.

Other warnings include a persistent seatbelt alarm, and a fuel warning that's triggered when the car has just 75 miles of fuel left, rather than the standard 50.

Drivers will be unable to switch off safety systems such as blind-spot warning, and parking aids.

When will it be available in the UK? Ford says the MyKey could arrive in the UK on the Fiesta as early as autumn 2012. Once here, it will be extended across the car maker's range.

Prices havent been set, but it could be offered as a no-cost option as it is in the US.