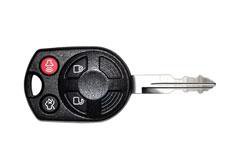 Parents who let their children borrow their car will be able to control some of the vehicle's settings through Ford's Mykey system.

Maximum speed and maximum volume on the stereo can be pre-programmed into the car keys.

When the keys are used the car automatically adjusts its settings, and these can't be over-ridden by the driver. The applications for this technology are not just of interest to parents lending their cars to their children, but to company and fleet vehicles.

Due to be released in mainland Europe in 2012 (but already available in the United States), the system can also alert the emergency services.

If airbags are deployed, or the fuel pump is shut off, the Emergency Assistance feature automatically calls 112 (the European Emergency number) in the local language with an introductory message and GPS coordinates.

The feature eliminates the concern of not being able to alert the emergency service because of language limitations or injuries.
Safety systems, such traction control that limits tyre-spin, can be programmed so they can't be turned off.

In the States, the seatbelt reminder can be programmed to be more insistent, with the stereo muted until all passengers are buckled up. Fuel warnings are given at 75 miles to empty instead of 50.

Ford's plans for Mykey in the UK are not clear at the moment, but it is monitoring reaction to the technology.