More for you |
Every 5-star car on What Car?Used test: Maserati Levante vs Porsche MacanNew issue of What Car? magazine on sale nowMost and least reliable small SUVsRevealed: the car makers whose discounts have got bigger since lockdown
Home
News
Formula One stars drive McLaren MP4-12C
news 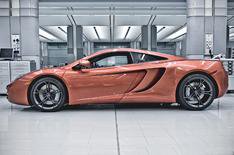 Formula One drivers Jenson Button and Lewis Hamilton will give the McLaren MP4-12C supercar its public debut at the Goodwood Festival of Speed later this week.

The festival takes place from Thursday, July 1 to Sunday, July 4, with Button driving the MP4-12C on Saturday and Hamilton taking the wheel on Sunday.

Visitors will be able to get a closer look at the MP4-12C on the McLaren stand, where they'll be able to inspect the Formula One-inspired supercar with its unique MonoCell. A team of McLaren specialists will also be on hand to answer any questions.

Formula One technology
Fans of the 600bhp 3.8-litre V6 car will also be able to get a close-up view of the MP4-12C's bespoke technology, such as proactive chassis control, the car's brake-steer system and unique airbrake feature that has been developed using F1 simulator technology.

Under-the-skin
Also on display will be an MP4-12C 'rolling chassis', which will afford visitors a unique under-the-skin view of the car to show how components are positioned around the MonoCell.