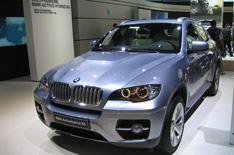 Two of the most powerful hybrids, showcasing technology that should trickle down to cheaper BMWs

What's new?
Not content with the stunning Vision Efficient Dynamics concept car, BMW is showing not one, but two, jaw-dropping hybrid models at Frankfurt.

The Active Hybrid X6 and Active Hybrid 7 both have the kind of power and acceleration that you'd normally associate with performance cars.

Each has a turbocharged V8 petrol engine, combined with an electric motor to provide more than 450bhp and a 0-62mph time of less than six seconds.

BMW claims the Active Hybrid X6 is the most powerful hybrid vehicle in the world, with all three motors producing a combined maximum of 478bhp.

A brake energy regeneration system helps the engine work as efficiently as possible, while the Active Hybrid X6 can run using electric power alone at up to 37mph.

Bespoke badges, alloy wheels and a 'powerdome' bulge on the bonnet distinguish the ActiveHybrid from other X6 models and dashboard displays indicate the status of the hybrid system.

It, too, has a twin-turbo 4.4-litre V8 petrol engine, but with a maximum of 443bhp. It also has just one electric motor, which produces up to 27bhp for a combined total of 459bhp.

How much will they cost?
There are currently no plans to bring either model to the UK. BMW says there's no business case for converting the models to right-hand drive while the market for such cars is dominated by high-powered diesels.

Verdict
An impressive showcase for what BMW can do pity they won't be sold in the UK.