More for you |
What Car?'s top 10 used electric cars (and the one to avoid)10 most unreliable SUVsWhat Car?'s best cars for less than £250 per monthGuaranteed discounts on our 2020 Award winners - save up to £19,366Skoda Kamiq long-term test review
Home
News
Fuel price a 'rip-off'
news

* Savings not being passed on * Price is a 'rip-off', says AA * London has most expensive fuel... 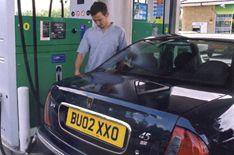 The price of petrol and diesel is being kept artificially high by fuel retailers that refuse to pass on cuts in wholesale costs, according to the AA.

Despite a fall of nearly 2p a litre in wholesale prices of unleaded petrol, the average price has fallen by just 0.42p a litre since the start of the month. Diesel prices have dropped slightly from an average of 110.02p to 109.86p a litre.

Price war fails to break out
Last week's price war on supermarket forecourts has failed to make a wider impact on the cost of fuel at the pumps, with retailers lowering prices only where they have competition from the food-store giants.

In towns where Asda has stores, such as Reading and Canterbury, other retailers have matched its unleaded price of 103.9p a litre, but in other areas the cost of petrol is 4-5p a litre more expensive.

Wholesale price falls retail price goes up
Petrol wholesale prices reached around 33p a litre at the end of October, but had fallen to 32p by mid November, and to 31.5p by the beginning of December. Average petrol pump prices, instead of reflecting the fall, increased from 105.30p a litre on October 1 to a peak of 108.99p on December 7.

The AA's president, Edmund King, said: 'Drivers can't expect to pay 103.9p a litre for petrol in every town, but being charged as much as 5p a litre more at the cheapest outlets in large towns is a rip-off.'

Southern regions pay the price
Regionally, petrol prices divide up into three clear areas: the North and Scotland averaging around 107.5p a litre, the Midlands at 108.3p, and the South and London at around 109p.

Diesel is most expensive in Northern Ireland, averaging 110.6p a litre, with the North West and Yorkshire/Humberside cheapest at 109.00p.