* Government calls on garages to sign up * 5000 outlets have joined so far * Code promises a better deal for consumers... 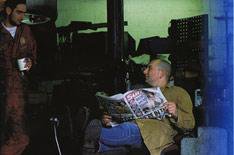 Independent garages should show their commitment to good service by signing up to a code of conduct.

The Consumer Affairs Minister, Gareth Thomas, has written an open letter to the independent garage sector calling on them to subscribe to the Motor Industry Code of Practice for Service and Repair.

The Code was launched in August 2008, and 5000 garages have since joined the scheme. However, there are an estimated 20,000 service and repair outlets which could sign up.

Thomas said: A successful code is good news for consumers and business. It means garages show a clear intent to operate an open and honest business which attracts customers. It's particularly important during the economic downturn that consumers are reassured they're getting a good deal.

You can find garages in your area that have signed up to the code by logging on to http://www.motorindustrycodes.co.uk.