GM's boss to step down 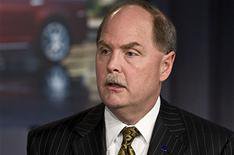 The boss of General Motors (GM) is to step down from the US car giant, it has been revealed.

Fritz Henderson was appointed to the post of chief executive by the US Government in March, but was seen as part of the old guard at GM due to his close links with former chief executive Rick Wagoner.

Mr Wagoner, who had headed the company since 2000, was ordered to resign by President Obama.

The company's chairman, Ed Whitacre, said that Henderson had done a 'remarkable job in leading the company through an unprecedented period of challenge and change'.

Whitacre has been installed as an interim replacement for Henderson.

No Government intervention
A White House spokesman said that the decision to oust Henderson was taken solely by GM's board of directors.

The spokesman said: 'This decision was made by the board of directors alone. The administration was not involved in the decision.'

Saab's fate in the balance
The announcement of Henderson's departure was just minutes after the conclusion of a board meeting to discuss the future of GM's Swedish brand, Saab.

Saab's future was put in doubt after a deal with supercar maker Koenigsegg Automotive collapsed at the end of last month. However, GM has announced that new bidders had emerged and it would look at them by the end of December.

A spokesman added that if GM could not find a 'suitable arrangement', it would "wind down" Saab.